Motion control relates to automation, and is all about moving individual parts of a machine in a controlled and repeatable manner using a controller, a motor and an actuator. Motion control is used in a broad range of automation applications including micromanufacturing, precision engineering, industrial manufacturing and testing environments. Ball screws and lead screws are both used in motion control applications – we take a look at how they differ, and which one is appropriate for what types of job.

What are ball screws and lead screws used for, and how do they work?

Both ball screws and lead screws are designed to translate rotary motion into linear motion, with a motor driving the rotary motion.

Ball screws: A threaded shaft provides a helical path for ball bearings which behave like a screw whilst providing minimal friction. Generally, they are built to much higher tolerances than standard acme or lead screws and are well suited to high precision applications. The ball assembly acts as the nut while the threaded shaft is the screw. Ball screws tend to be rather bulky, due to the need to have a mechanism to re-circulate the balls. Because balls screws are not self-locking, a braking system would need to be included in the overall design.

Lead screws: A lead screw consists of the same threaded screw and nut configuration of linear motion device as the ball screw, however it has no bearings or rollers and the screw threads are in direct contact with the moving nut component. Higher forces are possible with lead screws, but the direct contact creates more friction, therefore requiring more power from the motor.

Which is right for your application: ball screws or lead screws?

As we can see, ball screws and lead screws are designed based on similar principles and to carry out the same job in terms of motion control. However, they are suited to different types of application. A ball screw is most suited to applications that require speed, accuracy and precision, as well as high levels of usage. Lead screws are suited to applications where speed is not critical and they will not see high levels of use, but where significant linear motion is required on a budget.

Linear rails Vs. Linear rods – which are better? 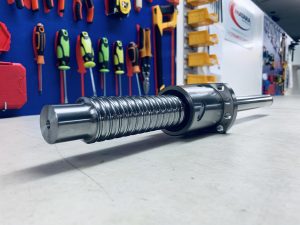 How ballscrews can help motion efficiency

How does a pneumatic cylinder work to improve application performance?

What linear motion control options are there?