Home » Technical Articles » What is the difference between static and dynamic load capacity for linear rails?

What is the difference between static and dynamic load capacity for linear rails?

Understanding the load capacity of any structure in an engineering environment is paramount, and is a standard consideration during the design phase. Linear rail loads are no exception, but it is important that the dynamic load capacity is the calculation used when designing a linear motion system which involves linear guide rails in order to avoid a catastrophic failure when the linear rails and their associated actuators are put to use.

How are linear rail loads important in linear motion design? 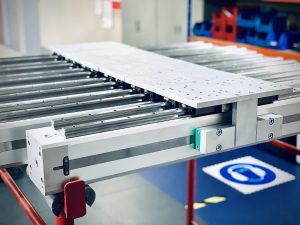 Linear rails have two parallel tracks that contain rollers to support a moving load, providing guidance and support for a load carried by an actuator between two points. Linear rails are used in a whole range of applications and can carry loads that vary from extremely light electronic components, through to large loads weighing thousands of kilograms in heavy industry. Understanding the intended purpose of the linear rails, including the size of the load, the load weight and the speed and nature of the movement is critical to selecting the right linear guide rails for the application.

How is load capacity calculated?

Load capacity is the maximum allowable force that can be applied to a structure in a specified direction while meeting the integrity requirements. This maximum force usually includes static (mass × gravity) and dynamic (mass × acceleration) forces.

What is the difference between dynamic and static loads?

Static loading is the load on an actuator when it is in a fixed position. Static loads are independent of time. Any dead load on a structure, for instance, is a static load. However, a dynamic load is the load the actuator handles when activated and in motion. The dynamic load capacity of an actuator refers to how much work the machine can actually do; how much can be pushed or pulled. When calculating a dynamic load capacity for a linear rail, it is important to encompass acceleration and deceleration of the load as well as the time of the motion. An example of this would be to say that it’s the difference between gently resting a bowling ball on a floor, and dropping a bowling ball onto a floor.

Why is it so important to calculate dynamic load capacity for linear guide rails accurately?

A linear rail system that hasn’t taken dynamic load capacity into account during the design phase will likely fail catastrophically in application. It could range from a loss of precision through increased friction or binding of the linear rails due to deformation, through to total structural integrity failure damaging both the actuator assembly and the product, as well as any bystanders.

Linear rails are available from Matara in a wide range of options from miniature or compact through to wide types and varieties designed for heavy linear rail loads. We can cut linear rails to length to suit your overall structure design. The dynamic load capacity is a critical factor when selecting the right linear guide rail for your application; if you would like any guidance on which would be the most suitable linear rail for your design, why not call today and speak to one of our experts on 01684 850000 or email us on sales@matarauk.co.uk.